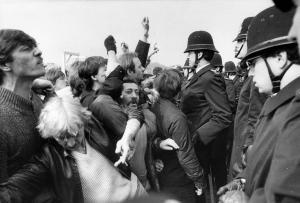 The university has teamed-up with local business, Past Pixels and Amp Worcs, to present a season of films about the controversial strike.

Reuben Irving, Senior Lecturer in Digital Film Production at the University of Worcester, said: “This is a unique opportunity to see a carefully selected season of films exploring the issues and to discuss them with some of the men and women who made history.”

The screening will form part of the Tolpuddle Radical Film Festival, and there will be a number of screenings at The Hive over the coming weeks, starting this Friday, May 8, with the 2014 documentary, Still The Enemy Within.

This film won the audience award at the 2014 Sheffield International Documentary Festival. The screening, at 7.30pm, will be accompanied by a talk from guest speaker Bob Anderson, who was a branch secretary of the National Union of Miners during the strike.

The documentary, Directed by Owen Gower, gives a unique insight into the dramatic events of the 1984-85 British Miners’ Strike.

An event spokesman said:”Thirty years on, this is the raw first-hand experience of those who lived through Britain’s longest strike.”

On June 6, there will be a screening of Ken Loach’s 1985 film, Which Side Are You On? This will be accompanied by a talk from Paul Kelly, ex-Agecroft NUM and author of “The Last Pit In The Valley”, and George Tapp, founder member of the Salford Miners Support Group.

On June 19, Salt of the Earth, a drama centred on the 1951 strike at the Empire Zinc Company, will be screened, with a talk from Phil Chamberlain, co-author of “Blacklisted: The secret war between big business and union activists”.

The season finishes on July 3, with Going Through the Change! Directed by Anne-Marie Sweeney, this 2014 film tells not just the story of the women during the strike but how the fight has continued, how the links with other communities and especially women has broadened and how the struggle for socialism and feminism are intertwined. Guest speakers at this event will be Brenda Proctor, Chair of the National Women Against Pit Closures and North Staffs Miners Wives Action Group, and friends.

All screenings will take place in the studio in The Hive. Films start at 7.30pm, and doors open at 7pm.

2 thoughts on “Whose side were you on? ”