The new Autumn /Winter season kicks of with a double bill of The Mc.Libel Trial and A Time Comes. As part of a link up with the Radical Film Network the same programme is being screened at venues across the country.

The events are being supported by the Scalarama 2015 programme. Get involved in the online discussion by using the #PeoplePower on Twitter.

The film documents the story of 6 Greenpeace volunteers who were tried but then a acquitted of showing down a power station in the UK. Their actions were in protest over the Government’s plans to build a series of new, coal-fired power plants despite the on-going climate change battle facing humanity. 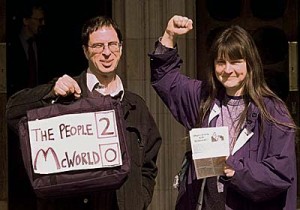 This ‘David and Goliath’ tale documents how gardener, Helen Steel and postman Dave Morris, took on one of the most recognisable names and biggest mights in commercialism – McDonalds – in a court case over free speech… and won.

This is a Pay What You Like Event. Please either make a donation on the door or buy a ticket online for the price you feel is right.

All proceeds will help us to keep WORFS running. All time and energy is donated for the cause (everyone volunteers).